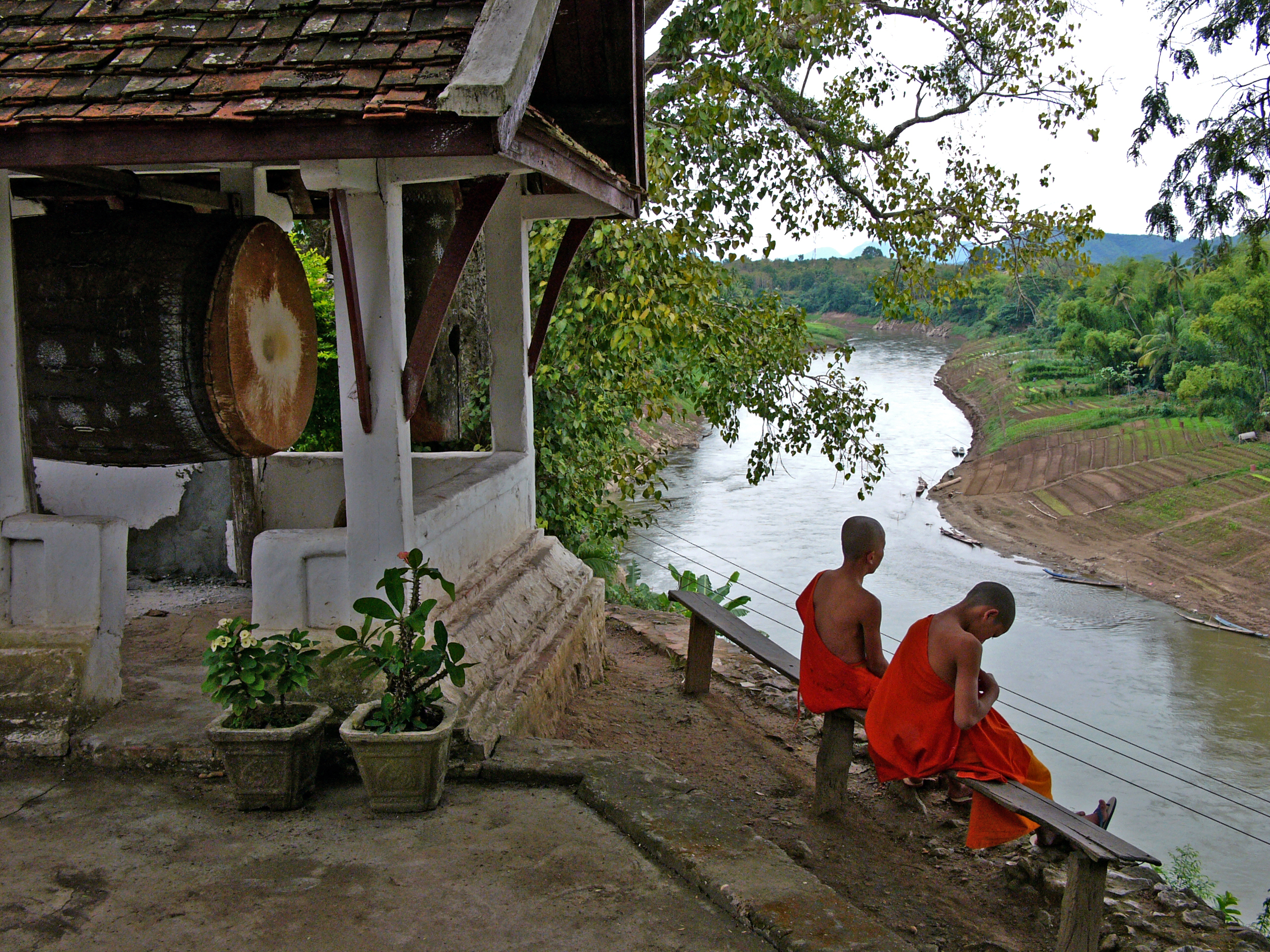 Monks along the Nam Khan

Fifty years ago, the Vietnam War was still raging and had spread into neighbouring Laos and Cambodia. One of the Western journalists reporting on the conflict on the ground was Martin Stuart-Fox who, based at the University of Queensland, went on to become a leading historian of Laos and good friend of NIAS.

In the upcoming (February 2021) issue of the Mekong Review, Professor Stuart-Fox reflects on journalists who reported on the conflict. In the piece below, the photojournalist Steve Northup recalls working with Martin in the conflict zone but also travelling with him across Laos and getting to appreciate there was much more to this land than conflict and misery.

Our thanks to Steve for his permission to use this material, first published in 2018 as ‘Photographing Laos’ in Engaging Asia: Essays on Laos and Beyond in Honour of Martin Stuart-Fox, edited by Desley Goldston. The images are fabulous but please remember they are copyright of the author.

While most contributions to this Festschrift acknowledge Martin as a scholar, I’d like to focus on another facet: Martin as journalist, documentarian and war correspondent. Martin and I were on the staff of the United Press International Saigon bureau in 1965 and 1966. We arrived about the same time and shared accommodation – and a great friendship was born. Together we travelled over most of South Vietnam by foot, jeep, helicopter and a variety of other transports. And miles and miles of walking. We shared a lot of fox holes. Here’s a shot I took of Martin and Tim Page after we came under fire in the Ia Drang in the highlands of South Vietnam on operation with the First Air Cavalry Division.

We experienced some of the worst of combat – that was our job. I once said that we were children, witnessing other children kill each other. It was a pretty depressing way to make a living.

When you venture unarmed into combat, your chosen comrade is of great importance. You depend upon him to help you out if you are wounded, bring you out if you are killed. Our trust was complete. I never doubted for a minute that Martin didn’t have my back. He was a man of uncommon courage.

He also knew the story he was covering. His knowledge of the history, culture, religions and people of Vietnam was extensive. He was a great friend and fan of all he covered. Not suffering fools lightly, if at all, he was often at odds with the American, Vietnamese and Aussie war establishment. He was sceptical without being cynical. He strived to hold an honest mirror, the most important task of any journalist. And he did a hell of a job of it. I’m very proud of what we did together, the words and pictures we sent out to the world. On leaving Vietnam, our lives took different paths. I remained in journalism, going to work for the Washington Post, and later Time magazine. Martin turned to academia. We reunited again in 2004 to produce the first of our two books on Laos. Here are some of the highlights.

There is nothing quite like dawn in Laos. It is a treat to all the senses. The smell of the morning charcoal fires, the roosters announcing the day’s arrival, and the colours of the sky producing a symphony for the senses. Even taste is included, in that first sip of good strong Lao coffee. We covered a lot of Laos on the project, driving from the Oxiana gold and copper mine near the border with Vietnam, across to the Mekong and down to Champasak and the ruins of Wat Phu, then up the length of the country, passing through Savannakhet and on up to Vientiane.

One of the joys of travelling with Martin is that he’s never a tourist. He folds into the fabric of the scene. Here is one of my favourite photographs, from our second book, Festivals of Laos. It shows the blessing of Sing Kaeo Sing Kham, the lion cub who was one of the protectors of Luang Prabang, by his shaman at the start of Pi Mai, the New Year festival. Notice the intimacy of the scene, locals only, except for a couple of round eyes. He can always find the really important parts. He knows how to be invisible while seeing.

The early morning alms walk by the monks in Luang Prabang has sadly turned into a tourist photo feeding frenzy. Pushing, snapping selfies, the whole awful tourist jostle. This photograph catches a quieter moment, on a rainy morning, as the monks returned to their wat. It is the sounds that I remember as much as the sights, the quiet slap of their bare feet and the rain on their umbrellas. Otherwise, silence, as they disappeared.

The wonderful, majestic Mekong was a constant in our travels. Some of my fondest memories of time spent with Martin were our evening Beer Lao on the banks of the river in small bamboo bars, discussing what we had seen that day and what tomorrow might bring. And then just sitting in silence as the river rolled by. These moments will never fade. As a photographer I learned early on that the best photos were not of an event itself, but of what happened before and after. This is a fine example. Here racing boats sit quietly along the bank of the Mekong at sundown the evening before the big races in Vientiane. The next day brought splashing, shouting and excitement, all good stuff, but the anticipation of all this was for me captured in this frame.

Another quiet moment in Luang Prabang, on our way up Phousi Hill. Martin and I came across this pair of young monks, quietly sitting on an overlook to the Nam Khan River. It turned out to be a much better picture than anything I made from atop the mount, which was noisy and crowded.

Once in a while, you have to show the crowds. This is from the 2004 That Luang festival. Martin and I arrived in Vientiane to be told that because of the impending ASEAN meeting, all foreigners would be tossed out of town. Somehow we managed to avoid the ban, attend the festival, and skip the conference. A wise choice. We went out to the majestic stupa the day before the main event, lit incense, and performed our circumambulation, clockwise. I found this vantage point and decided on the right lens. The crowd was a gentle, reverent throng. Nothing, except offerings, was left behind.

In the midst of the That Luang festival, days of moving crowds, fireworks and offerings a few quiet moments stand out. This one was in Wat Si Meuang. A circle of worshippers bound by a long white string listen intently as monks bless offerings brought by the faithful.

What do others say? Reviews of "Engaging Asia: Essays in Honour of Martin Stuart-Fox":

“This compendium is a worthwhile, engaging, and useful contribution. Reading all these chapters as a set leaves the reader with a sense of a deep history of entanglements emanating not so much to the region from outside superpowers as from within the region itself. Stuart-Fox surely must feel satisﬁed to see the emanations from his life and work as they are represented in this volume. Historians of Southeast Asia, particularly scholars of Laos, will want this book in their libraries.”

Joyce C. White, University of Pennsylvania, published in The Journal of Asian Studies

“Mirroring Stuart-Fox’s own work, the chapters combine primary sources with historical method to produce rich analyses. Regarding strengths, this book usefully assembles an up-to-date assortment of chapters about various eras in the historiography of Laos and Laos-related issues by experts on Laos. The book has an easy reading style, making it accessible to anyone, though it is likely most practical for historians of Laos. As a contemporary compendium of 18 excellent papers celebrating the work of a leading Lao historian, [the book] is outstanding.”

“Engaging Asia then delves into a range of topics concerning the wide interests of Stuart-Fox and the work of scholars he has taught. There is something for everyone here (…). The reader is left wanting to know more about Laos—undoubtedly an achievement of one of the aims of this book.”

You can read more about the volume here and order a hardback or paperback copy here.