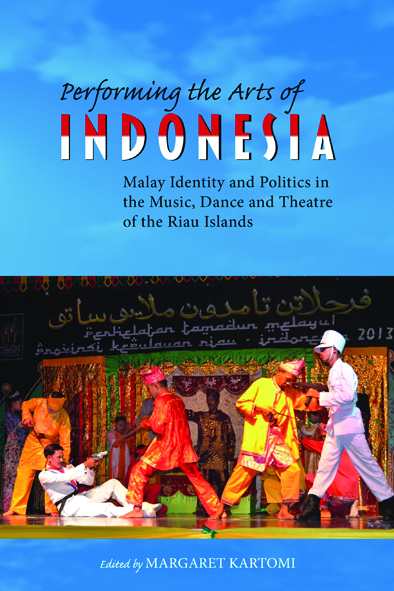 ”This book is a forum for information and discourse on the previously little known history, politics and identity of the performing arts of the small island region of Kepri”

‘Performing the Arts of Indonesia‘ is a pioneering book on the arts and artists of Indonesia’s recently autonomous Riau Islands (Kepulauan Riau) province, colloquially referred to by its acronym, Kepri. Located in the centre of the Malay-speaking world of Southeast Asia, it shares a border with Singapore and Malaysia and spans the Strait of Melaka and the South China Sea. Its 2,408 or so islands are sprinkled across its waters ‘like a shake of pepper’ (segantang lada). Since the mid-19th century Kepri has widely been regarded as the birthplace of the modern Malay language and literature and as a centre of Islamic knowledge. Like Aceh, it also acquired a reputation as ‘the Verandah of Mecca’ due to the large numbers of pilgrims who have departed from its shores over the centuries.

Despite its proximity to Singapore, much of Kepri is a little-known world. Kepri’s 2 million inhabitants share a seafaring worldview, reflected in their traditions and daily life. This worldview is expressed most vividly in the performing arts of its largest and smallest population groups, the Kepri Malays and the formerly nomadic Orang Suku Laut (People of the Sea) respectively. 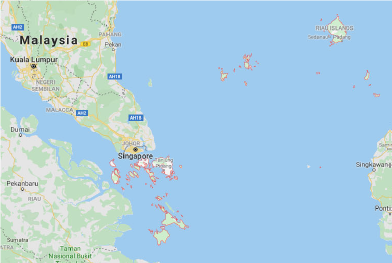 Kepri’s substantial Chinese-Indonesian population has also produced a unique form of puppet theatre –wayang cècak, seen as their community’s icon of identity and has recently inspired some remarkable Malay-Chinese theatre and dance creations.

The book’s interdisciplinary authors, including ethnomusicologists, dance scholars, theatre scholars, anthropologists, historians, linguists and sociologists from Indonesia, Australia, UK, Europe, and North America,  draw on diverse examples of Kepri’s musical, dance and theatre genres from different groups of islands and in the process adopt varied approaches to understanding the social and artistic importance of the people’s concept of ‘Malay identity’ or ‘Malayness.’

Several authors relate the genres to traditional Malay concepts of cosmological and performance space and place, while others focus on the serious and comic elements and distinctive music and dance styles of local versions of well-known forms such as bangsawan musical theatre and lesser-known forms such as mendu theatre. Some authors include brief accounts of the distinctively Malay styles of music, dance and theatre, while others seek out the melodic, rhythmic, poetic, gestural and dance motifs that recur throughout the spontaneously generated performances. These motifs serve as ‘memory codes,’ to use Lynne Kelly’s term (Kelly 2016: 296), that enable the artists to generate remarkable group performances for hours at a time without rehearsal or written guides.

For millennia, the Riau Islands were part of the ‘maritime silk road’ between China and Southeast, South and West Asia, as proven by the porcelain, precious stones, metal gongs, and other valuable trading goods dug up in ships wrecked off its shores over the centuries. Kepri’s location has indelibly influenced the kacukan (syncretic) nature of Kepri’s artistic genres that may contain not only Malay but also Chinese, Indian, Perso-Arabic, and/or European stylistic characteristics and content.

Until ca. the 15th century CE, the island kingdom of Riau was loosely attached to the great Buddhist Srivijaya empire (ca 7th to 15th century CE) centred in Palembang. After its king and subjects converted to Islam from ca. the 17th century, it became known as a centre of Islamic learning and ‘the Verandah of Mecca,’ as many pilgrims sailed from Kepri to Mecca to complete the haj. In the 19th century it also achieved fame as the birthplace of the modern Malay language and a major centre of Malay literature.

Some authors cover performances of genres that are associated with the people’s syncretic Animist-Hindu-Buddhist beliefs while others discuss the Islamic arts. Some of the chapters focus on the essential role of the arts in the political sphere such as the royal nobat ensemble in the efficacious engagement of power in Kepri’s erstwhile kingdom and its eventual submission to the colonial Netherlands East Indies, while others focus on changes in post-colonial Indonesia. Others show how certain genres have changed to meet modern needs, and how some have morphed into the national and international pop music scene, especially since Kepri attained autonomy in 2004.

Providing focus to this interdisciplinary volume are detailed descriptions by its 14 authors of traditional and contemporary performances of music,  poetry, dance, bardic arts, and martial arts in relation to their ethnographic context and the people’s recent debates about the politics of identity in the newly created province of Kepri (from 2004). Each of the five maritime regencies chose a particular performing art as its icon of identity which it sees as contributing to the identity of the whole province vis-à-vis other Malay-oriented areas of Indonesia and Malaysia. Such choices were made after wide-reaching discussions and debates were held among and within groups of elders, artists, women, youth groups and government bodies in the five regencies and two metropolises of Kepri around the year 2010. A few sound and video examples are also found on a companion website.

Part I covers the Riau archipelagos and surrounds as a whole, with the editor introducing the geography, history and arts of the islands, the islanders and the significance of Malay concepts of place and space in the arts. Historian Leonard Andaya then introduces three principal ideas –his concept of ‘the world of the southern Malays’, including the formerly little-studied areas of eastern Kepri and west Kalimantan/Borneo, the significance of boundaries that had specific meanings and historical implications at the time, and how the riverine and maritime environment, trade, mobility and Islam  contributed to the hybrid (kacukan) quality of Malay culture. Anthropologist Cynthia Chou’s chapter brings the reader to a new understanding of  the sound of music among the Orang Suku Laut (People of the Sea) today. Ethnomusicologist Jenny McCallum examines age-old concepts of sound, space and social relations in 19th century Malay texts in relation to the other senses and socio-cultural constructions and contexts.

Part II is devoted to the traditional arts in the western parts of the Riau Archipelago. Ethnomusicologist Bronia Kornhauser describes a recent rural performance of the Lingga regency’s chosen icon of identity – bangsawan theatre, and finds historically significant memory codes recurring throughout its songs. Ethnomusicologist Brigitta Scarfe and Kepri-born ethnomusicologist Mohamed Hasbi compare rural and urban performances of genres linked to the former sultanate of Riau-Lingga – the biola (violin) ensemble and joget dangkung dances. Anthropologist Vivienne Wee analyses some remarkable kinship relations between generations of musicians on the former Viceroy’s island of Penyengat and discusses their musical creativity in colonial and post-colonial times. Kepri-born dancer Raja Alfirafindra and dance scholar Rina Martiara show how Kepri’s zapin dances on Penyengat with their low-pitched gambus ensemble music were transplanted to the island in the early 20th century from Sambas in west Kalimantan and then developed into a unique zapin Penyengat style.

Part III takes the reader to the Natuna and Anambas archipelagos, ‘located in the far northeast of the Riau islands at the southern tip of the South China Sea on the maritime Silk Road trade route between China and India,’ to quote Karen Kartomi Thomas on Natuna (p. 239). First, Kepri-born artist Syafaruddin, Manolete Mora and the editor discuss the history and present state of the contemporary icon of Anambas – gobang mask theatre, describing the traditional all-night performances by male dancers wearing inherited or newly home-made masks symbolising animals, ghosts, giants, spirits, as they dance free style and barefoot on a local beach or open field, concealing their identity till dawn to everyone’s delight and amusement. Then Karen Kartomi Thomas’ chapter deals with the icon of the Natuna regency – mendu, ‘a form of traditional Malay theatre based on plots from the Dewa Mendu epic set in the fictitious world of prosperous Malay lands ruled by just and courageous Malay kings and their evil opponents’ (Thomas, ibid.). In her comparison of a pre-modern and a recent performance, we learn that expressions of mendu’s original cosmological significance and rural village character have recently experienced major structural changes while retaining the memory codes and other essential elements of its dances and music, staging, and interactive across-the-arts performance style.

Part IV focuses on the contemporary music of Kepri’s only two metropolises, located in western Kepri. Anthropologist and linguist Geoffrey Benjamin discusses the Malay art music of composers and performers in the metropolis of Tanjungpinang and its offshore island of Penyengat, the former seat of the Viceroy of the kingdom of Riau-Lingga, focusing on a diverse range of contemporary artists including some descendants of the former royals on Penyengat discussed in Vivienne Wee’s chapter. Ethnomusicologist Manolete Mora’s chapter discusses Kepri’s cosmopolitan popular music, focussing on some key artists and genres performed on Batam and Bintan Islands and some local aesthetic responses to the socio-cultural transformation of the culture that is occurring in the early 20th century.

Finally, anthropologist Nicholas Long presents a vividly written account of the artistic achievements of a diaspora group of musicians living in Tanjungpinang. His chapter shows how these musicians from Flores in East Nusa Tenggara create their lyrics in Malay and play their style of Malay music without ever forgetting their cultural roots, and how they feel that they own ‘Malay music’ just as much as members of the ethnic Malay population around them.

In summary, this book is a forum for information and discourse on the previously little known history, politics and identity of the performing arts of the small island region of Kepri. A region that remains famous to this day for its Bugis-Malay poets and scholars who led the renaissance of Malay literary forms in the 19th and into the 20th century, its performing artists have created such a diverse array of extremely distinctive music, dance, martial arts and theatre forms in its many archipelagos. Readers interested in the lifestyles, stories, and artistic expressions of its two million people and their maritime outlook will be fascinated by this book, as will those interested in the history, ethnomusicology, anthropology, sociology, dance studies, theatre studies, language and literature of a uniquely maritime province that was once home to a thriving Malay kingdom. 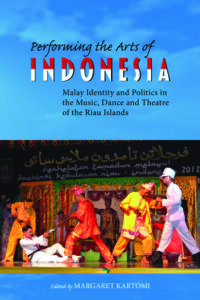 Margaret Kartomi‘s edited volume ‘Performing the Arts of Indonesia’ is now available all over the world. You can find more information in our bookshop.