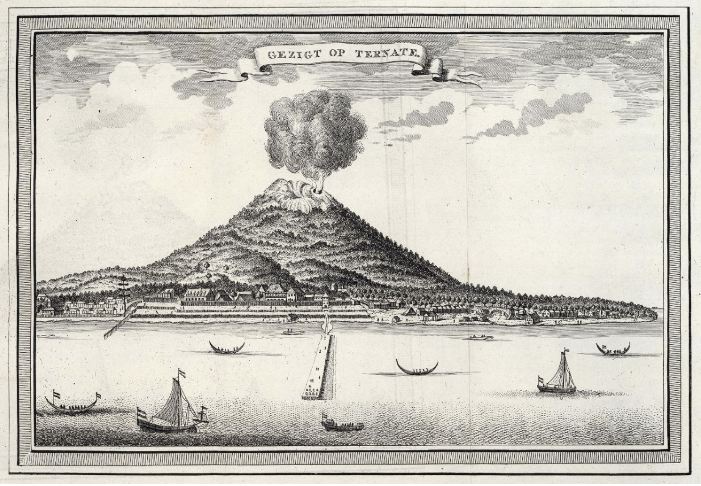 In this letter from Ternate, Carol Ann Boshier explores one of the islands of the Indonesian Archipelago and reveals its connection to the Theory of Natural Selection

Early one morning in March 2017, our Lion Air flight flew low over the pellucid waters surrounding Ternate, one of the northernmost islands of the Moluccas in the Indonesian Archipelago (1). I spent six years living in Indonesia with my husband during the 1980s, where he worked on a coal project in East Kalimantan. From time to time, nostalgia has drawn us back to places in Indonesia that we never visited, and this was one such occasion. We’d caught the 2.00am ‘red eye’ from Jakarta, straight off a long flight from London, landing just before 8.00am at Ternate’s Sultan Babullah airport. It’s a short walk from there to the town, which hugs the base of Mount Gamalama, the volcano that dominates the entire island of Ternate and overlooks its smaller sister, Tidore, across the water. 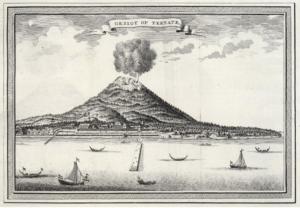 Exhausted though we were after such a long journey, we wanted to make the most of our few hours’ stopover before continuing our flight to Ambon later that morning. Hiring motorbike taxis, we weaved our way precariously through narrow streets, starting at the old Portuguese fort on the edge of town and heading towards the Sultan’s Palace at the centre. 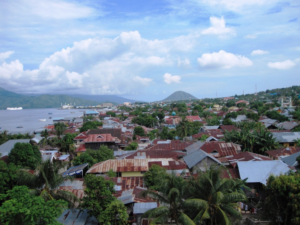 Now a rather run-down museum, it was once the seat of some of the archipelago’s most powerful rulers – celebrated throughout the East for their regal magnificence, which was funded by their trade in spices. Ternate was famed for its cloves, while nutmeg grew wild on the adjacent islands. 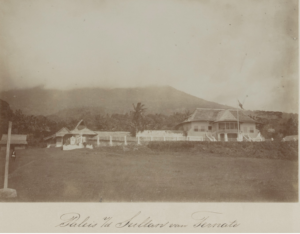 Arab merchants had controlled the spice trade for centuries; but from the sixteenth century, Europeans began to arrive. The Portuguese were the first – the most well-known being Ferdinand Magellan, who led an expedition on behalf of the Spanish in 1519. When the famous English explorer, Sir Francis Drake, visited Ternate in 1579, he marvelled at the Sultan’s gold attire and glittering jewels (2). At the time of Drake’s visit, the spice trade was still monopolised by princely rulers like Sultan Babullah, who had temporarily succeeded in driving the Portuguese from Ternate to a small settlement on neighbouring Tidore. 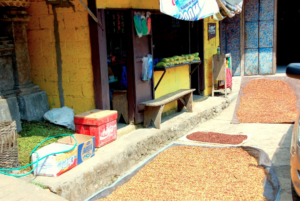 By the beginning of the seventeenth century, the Dutch took control of this lucrative trade in exchange for finally freeing the islanders from Portuguese oppression. They restricted spice cultivation to areas where they could be sure of complete domination, paying off local rulers with fixed subsidies.

Brief though our stopover was, we were not the only visitors to be enchanted by Ternate and its magnificent setting. More than a century earlier, the renowned naturalist and collector, Alfred Russell Wallace (1823–1913), chose Ternate as his base during the years that he spent wandering the Moluccas, hunting for birds, butterflies, and insects. He consigned the specimens that he collected to England, where they were handled by his agent, Samuel Stevens, from his London headquarters at 24 Bloomsbury Street, reserving some specimens for Wallace’s own private collection. 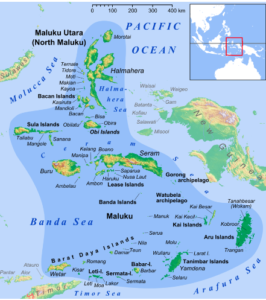 As well as profiting for himself (3), Stevens sold the vast majority on commission to museums and buyers throughout Europe in order to fund the eight years Wallace spent travelling throughout the Malay Archipelago from 1854–1862 (4). Although he did not come from the wealthy background usually associated with Victorian gentlemen naturalist-collectors, Wallace’s explorations and studies of the natural world blazed a trail in establishing fieldwork as an essential component in the lexicon of natural science. Entirely self-taught, he became one of the leading scientific knowledge-makers of his day, taking his place amongst the great names associated with nineteenth-century natural science, like Darwin, Huxley, Hooker, and Humboldt (5). 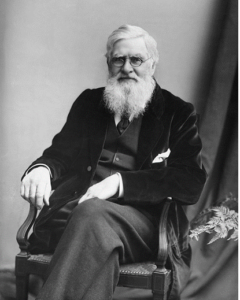 Wallace first arrived on Ternate in January 1858 and with the help of one of its long-standing residents and traders, Mr Duivenboden, he soon found a house, which remained his base in the Moluccas until 1861 (6). During all his wanderings, Wallace relied upon the hospitality and support not only of the Dutch colonisers, but also the indigenous rulers and their subjects, whom he paid to assist him in supplying boats and oarsmen, pilots, porters, and houses. Many of the local inhabitants in the remote locations that he visited had never before encountered a white man.

In March 1858, towards the end of his first stay on Ternate, Wallace had an epiphany concerning the theory of natural selection as being the main process through which evolution occurs. It came to him whilst he was recuperating from an illness; and he later recorded in a letter to a friend that he had hastened to explain his ideas to Charles Darwin, with whom he was in the habit of corresponding about his fieldwork. Although Wallace’s original manuscript and accompanying letter have been lost, they have become the subject of a long-standing disagr 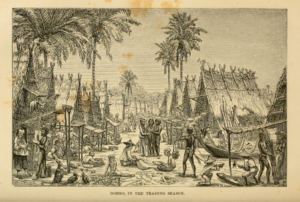 eement amongst scholars and the casus belli over which of these two men was actually the first to publicly communicate the theory of evolution by natural selection. The argument hinges upon whether or not Wallace’s letter to Darwin (enclosing the manuscript which has become known as his ‘Ternate Essay’), was written on 9th March 1858, in reply to one he had received that same day from Darwin. Much of the dispute revolves around the actual date in March that Wallace mailed his correspondence to Darwin and when exactly he received it. Wallace’s motive in alerting Darwin so quickly was because he hoped he would pass his ideas on to Sir Charles Lyell, who was a close and influential friend of Darwin and whose opinion he was eager to receive. As a well-known geologist, Lyell had taken an interest in Wallace’s work and he duly arranged for both men’s ideas to be submitted to the Linnean Society, which were later published in its journal under the heading ‘On the Tendency of Species to Form Varieties; and on the Perpetuation of Varieties and Species by Natural Means of Selection’ (7). A year later, Darwin published his famous book, On the Origin of Species. Whilst he is the man whom everyone remembers as the first to advance the theory of evolution, it can rightly be co-attributed to both scientists. 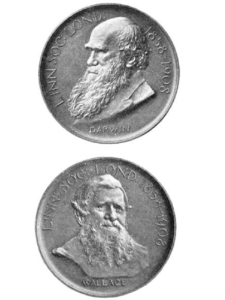 Wallace never bore Darwin any ill-will for receiving all the plaudits for their joint discovery and he was honoured by the interest he took in his work. He only ever expressed gratitude to Darwin for his friendship and encouragement, and also towards Hooker and Lyall, upon whose initiative his ‘Ternate Essay’ was read to the Linnaean Society in July 1858. But the question remains, did Charles Darwin commit intellectual theft by including details of Wallace’s theory in his own manuscript after receiving his ‘Ternate Essay’ sometime in June 1858, before he showed them to Lyell? (8). As the original documents have not survived, nor has proof of posting ever been established, we shall never know the answer to this controversy.

Wallace never returned to Ternate after he left in 1861, but one day I hope to do so. I would like to spend more time exploring its narrow streets, peering through the open doors of the many go-downs at the piles of cloves, dried and ready for bagging and shipment all over the world. Even if the house no longer exists, I’ll try to find the street where Wallace spent hours engaged in writing up his specimens and reflecting upon his encounters with the many species who inhabited the natural world, and which enabled him to formulate his ground-breaking theories on their origins. Although from humble beginnings, with little formal education, Alfred Russel Wallace’s career exemplifies that of a true scientist, whose dedication to discoveries through fieldwork marks him out as one of science’s greats. Over the centuries, Ternate has lured many an adventurer in search of its natural wealth, but Alfred Russel Wallace carried away a far greater prize from his stay on this enchanting island – enduring knowledge – whose power never dims. 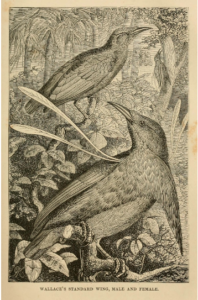 One of the first visits that Wallace made from Ternate was to the neighbouring island of Gilolo, now known as Halmahera. Today, it only takes a half-hour journey by speedboat to reach the capital Sofifi of this large ‘K-shaped’ island, but it took Wallace’s boatmen three hours of hard rowing and sailing. According to the travel writer, Paul Spencer Sochaczewski, Halmahera, with its mountainous landscape and isolated interior, is still the subject of mystery. In his book about Wallace (9), he relates details of the Orang Togutil, a supposedly naked ‘lost white tribe,’ whose home was in the inaccessible hills of the island’s interior. But when Sochaczewski arrived on Halmahera, he found the Togutils sitting around in their villages, perfectly friendly and fully clothed. So much for tall tales! If I’m ever able to make the short sea crossing from Ternate, I will be perfectly content to discover Blyth’s Hornbill or Wallace’s Standardwing Lek in their natural habitat – and I’ll send you another letter – this time from Halmahera.

Carol Ann Boshier is a Research Associate at the School of Oriental and African Studies in London. Her work endeavours to understand the constraints and possibilities offered by social and intellectual exchanges between colonized and colonizing professional elites. She is the author of ‘Mapping Cultural Nationalism’, published by NIAS Press in 2017. ‘Mapping Cultural Nationalism’ was shortlisted for the EuroSEAS Humanities Book Prize in 2019. You can buy the book here.

(1) Now known as the Malaku Islands.

(4) Prior to Indonesian Independence from the Dutch in 1945, Indonesia was known as the Malay Archipelago, or Dutch East Indies.

(7) Charles Darwin and Alfred Russel Wallace, ‘On the Tendency of Species to Form Varieties; and on the Perpetuation of Varieties and Species by Natural Means of Selection,’ read to the Linnean Society in July 1858 and published in Journal of the Proceedings of the Linnean Society of London Zoology 3 (1858), pp. 45–50.