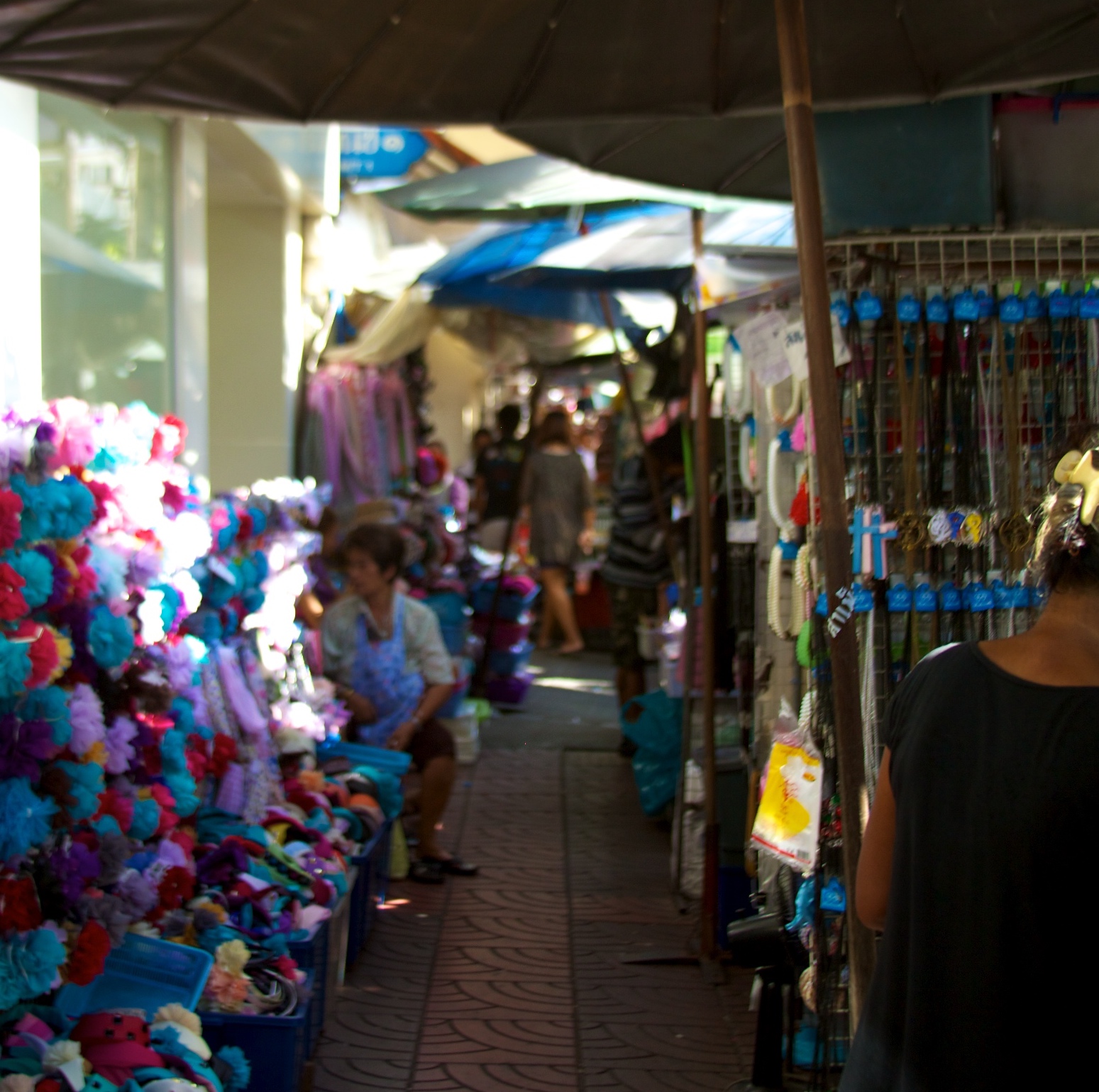 Shopping along narrow Sampeng Lane in Chinatown. By McKay Savage

-Ever since my first trip to Bangkok as a PhD student to do my initial field research for A Meeting of Masks, I’ve been back many times. Shopping malls continue to be important social hubs, and consumption remains as popular an activity as ever. Although my investigations of consumption in Bangkok were centred on issues of status distinction and class identity, I often wondered about the environmental cost of a way of life made possible by countless chugging air-conditioning machines, the draw of ‘fast fashion’ and other forms of mass production and consumption, and the ease of convenience over conscious waste management.

Will consumption in Bangkok eventually evolve and adapt in response to the critical climate crisis the world is currently facing? In many respects it’s been ‘business as usual’.

Will consumption in Bangkok eventually evolve and adapt in response to the critical climate crisis the world is currently facing? In many respects it’s been ‘business as usual’. However, there are small but encouraging signs that awareness of climate change and sustainability issues is increasing, at least amongst some of the city’s residents.

Thailand is considered one of the world’s largest consumers of plastic shopping bags. Over the past decade, the country has generated about two million tons of plastic waste, of which a meagre half a ton is reused or recycled annually. This year, the government declared waste management a national agenda, and all Thai government ministries pledged to limit use of plastic bags and foam packaging. Meanwhile, industry groups have pledged to take Thailand from being the sixth heaviest contributor of plastic waste to the world’s oceans, to halving this amount by 2027.

Things are also shifting for the individual consumer. It used to be common to go into a 7-11 convenience store to buy a bottle of drinking water, and to be handed the water inside a small plastic bag alongside a handful of straws. Then, the plastic bag and most, if not all of the straws, would be discarded immediately upon exiting the store. Similarly, a trip to buy a small basketful of groceries at the supermarket would mean going home with at least three or four plastic bags, which would then have to be disposed of upon returning home (or left to guiltily clog up an entire kitchen drawer until issues of space required them to be dumped unceremoniously with that week’s garbage). However, since the beginning of 2020, most supermarkets and convenience stores in Thailand have stopped giving out plastic single-use bags. Unfortunately, the practice has continued in smaller retail shops and in local fresh markets.

Changes are also perceptible in the type of consumption that Bangkokians have begun to embrace. Just a few short years ago, your friendly herbivore would have been hard–pressed to find dinner anywhere other than ‘raan jae’, neighbourhood Buddhist food stalls hawking such delights as mock duck swimming in soy sauce, or limp stir-fries coated in cornflour and palm oil.

Today, however, enthusiasts of plant-based diets hankering for a quinoa burger or cashew cheese fix have numerous options to choose from for a more sustainable meal. In the last several years, more and more vegan and vegetarian restaurants have been popping up, many of them in the upmarket district of Sukhumvit. Farm-to-table style dining has also become highly trendy and sought after, and one of these restaurants has even earned a Michelin star.

To begin with, cost and convenience are two important challenges that will need to be overcome in time-poor, highly unequal Bangkok.

A few farmer’s markets now exist where Bangkokians can buy locally grown and artisanal products such as sourdough bread and homemade yoghurt, although these are still held at malls where shoppers can continue their retail therapy at international fashion chains and food franchises. Organic food has been available for years at high-end supermarkets – at a premium cost. One of the newest additions to the sustainability scene is a café and refill station in Onnut, where consumers can reduce the amount of waste that they use by bringing their own reusable container.

Yet, fashionable as the sustainable consumption scene has become in these small pockets of the city, whether or not the movement spreads beyond this niche group of affluent, cosmopolitan, middle- and upper-class Thais and into the mainstream remains to be seen. To begin with, cost and convenience are two important challenges that will need to be overcome in time-poor, highly unequal Bangkok.

Cars remain an important status symbol distinguishing between haves and have-nots, and the city’s legendary traffic jams endure. Even if people were to opt out of driving, Bangkok’s cracked sidewalks are barely pedestrian-friendly, let alone bike-friendly, meaning that the sight of commuters cycling to reduce carbon emissions is a long way off without a major overhaul of the roads and streets. Additionally, public transport such as the BTS skytrain and MRT subway systems have been plagued by years of criticism surrounding slow line expansion and frequent service disruptions.

Another challenge will be whether or not the Thai government’s pledges and declarations will be accompanied by the major systematic and structural changes required to support consumer choices and grassroots initiatives, and ultimately, make a difference. In the end, as hopeful as the small signs I’ve described here seem to be, they do little to dissipate the increasing sense of urgency surrounding the environmental crisis that we face. Bangkok is indeed taking some steps in the right direction towards sustainability, but much more needs to be done.

Sophorntavy Vorng is the author of ‘A Meeting of Masks: Status, Power and Hierarchy in Bangkok‘, published in 2017 by NIAS Press. You can read the latest review of the book here.

The Fog of War Again Descends on Afghanistan

‘Thanathorn: the rise and fall of a Thai political icon’ – Nikkei Asia