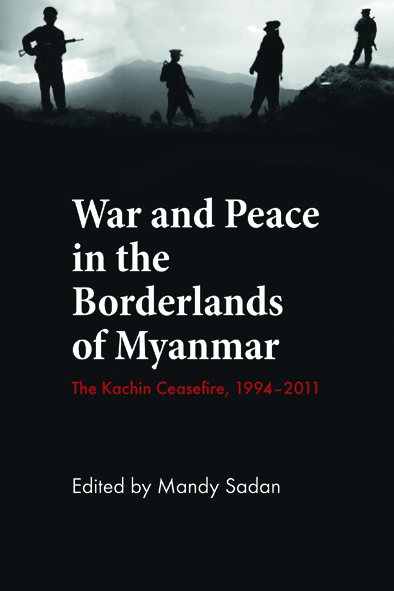 • Offers important insights into Myanmar and its ethnic situation.
• A must-read for anyone working with conflict issues.

In 2011 armed hostilities between the Kachin Independence Organisation
and Myanmar Army ended a 17-year ceasefire agreement. The unwillingness of local Kachin people and the Kachin political-military leadership to bow to pressure for a speedy renewal of the ceasefire frustrated many observers and policy makers, who hoped to see a national ceasefire agreement signed between the Myanmar government and the country’s principle armed ethnic organisations. Yet since the ceasefire collapsed, surprisingly little attention has been paid to understanding in detail the experience of the previous 17 years of ceasefire in the Kachin region and how this has influenced local political and military attitudes, or the continuing significance of these experiences in relation to the ongoing
national peace process in Myanmar. This book brings together local
activists with international academics and acclaimed independent
researchers to reflect on these experiences from a variety of cultural,
political, economic and social perspectives. Collectively, the authors
shed critical light upon the reasons why an area that was once considered
an important collaborator in the goal of political transition in Myanmar should most recently have seen the return of significant popular support for a resumption of armed conflict. The arguments and insights that the book offers raise important questions about the social, economic and political development of Myanmar’s ‘border regions’ in recent years that will be relevant long into the future, including after a nationwide ceasefire may be signed. Crucially, the chapters provide important lessons about the dangers inherent in ceasefire agreements when an ‘armed peace’ is implemented that is not accompanied by a substantive commitment to political change.

Buy "War and Peace in the Borderlands of Myanmar" here

Mandy Sadan is Reader in the History of South East Asia at SOAS, University of London, where she is also Associate Dean (Research) in the Faculty of Arts & Humanities. She has published numerous articles on the history and cultural politics of the Kachin region. Her first monograph, Being and Becoming Kachin (Oxford: OUP) was published in 2013 and recently won the inaugural EuroSEAS Book Prize.