Monarchy, Democracy and the Supra-constitution 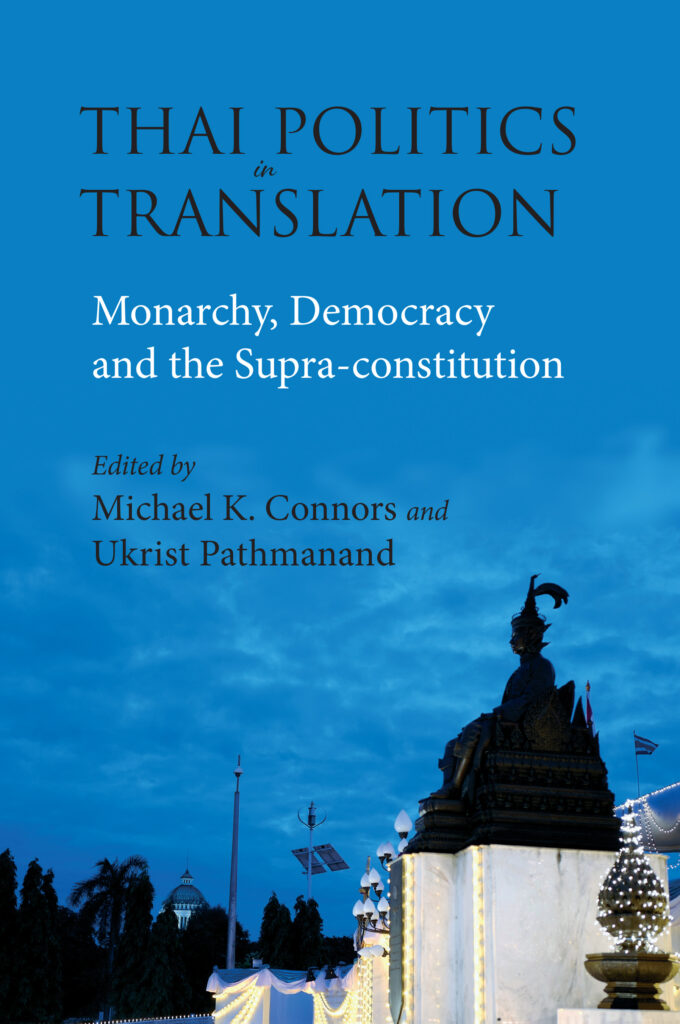 Since Thailand’s prolonged political crisis began with royalist mobilization against prime minister Thaksin Shinawatra in 2005, international observers have been treated to easy clichés about reactionary Thai elites. The chapters in this book invite readers to hold back quick judgement and instead engage with the conservative norms of sections of the middle class, the military, intellectuals and state ideologues.

The opening chapter by the editors provides a historical overview of relevant themes and introduces the translated pieces. It also argues that the concept of a supra-constitution – first introduced by legal scholar Somchai Preechasilpakul in a brilliant lecture to the Pridi Banomyong Institute in 2007 – is a powerful frame for interpreting conservative Thai politics. Somchai’s lecture, now translated here, explains that an unwritten supra-constitution sits above the many failed constitutions that litter Thai history. Like a guiding spirit it contains evolving norms on military and monarchical power which circumscribe democratic political contest.

Other translations include chapters from Nakharin Metrairat’s seminal Thoughts, Knowledge and Political Power in the Siamese Revolution (1990) and the unsurpassed Political Thought of the Thai Military (1990) by Chalermkiat Phi-nuan. Nakarin’s account of vibrant traditionalist thought and Chalermkiat’s interrogation of the cosmological underpinnings of military thought offer profound insights unavailable in English-language scholarship.

On royalism, the translation of Kramol Thongthammachat’s “National Ideology” illuminates how an important state ideologue co-developed a cross-class royalist ideology that emerged as a powerful force after the polarized 1970s. The Thai politician Pramuan Rajunaseri’s sensational book Royal Powers, in part translated here, helped in 2005 to mobilize royalist sentiment against Thaksin.

This is a must-have reference, one that enables a better understanding of the forces that have shaped Thailand’s democracy struggles.

Ukrist Pathmanand is Research Professor in Political Science at the Institute of Asian Studies, Chulalongkorn University, and co-author of the acclaimed Thaksinization of Thailand. Both editors have written widely on Thai politics and society, and recently co-authored the article “Thailand’s Public Secret: Military Wealth and the State”, which appears in the Journal of Contemporary Asia.

Michael Connors teaches at Xi’an Jiaotong-Liverpool University, PRC in the Department of International Studies and is the author of Democracy and National Identity in Thailand.

by Kittisak Sujittarom
From journal: Contemporary Southeast Asia
Thai Politics in Translation provides English-speaking readers with an overview of Thai thinking on the country’s modern politics, covering various political actors over different periods of time. […] On the whole, [..], the book offers well-translated works which will serve as must-have references for scholars and others interested in Thai democracy and conservatism.
Read full review
by Wasana Wongsurawat
From journal: Mekong Review
Considering the ongoing upheavals in Thai politics these days, it is hard to imagine a more timely publication than Thai Politics in Translation: Monarchy, Democracy and the Supra-constitution. … Six of the seven essays were originally written and published in Thai and, until now, had never been published in English. This is significant, as many of the concepts fundamental to understanding Thai conservatism in this era … have been elaborated mostly only in the Thai language. This makes it difficult for non-readers of Thai to trace the origins and developments of these concepts, which have become part of the common narrative of Thai conservatism in the 2020s. Having these fundamental works of Thai political thought translated into English is one of the book’s most important contributions.
Read full review
×
×