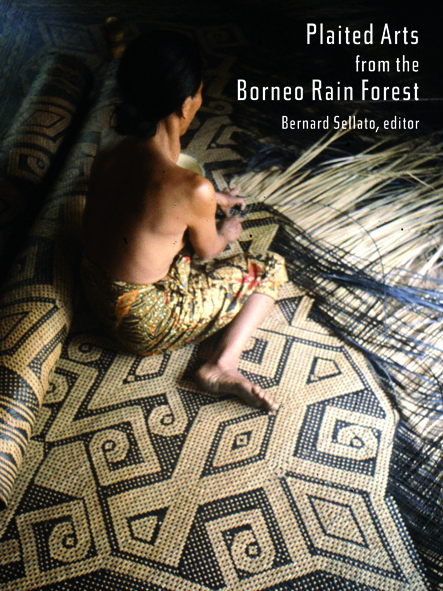 Borneo is home to one of the world’s largest and richest tropical rainforests, providing a wealth of plants for use by its inhabitants. Many of Borneo’s finest works of art are made from simple plant materials such as rattan, bamboo, and pandanus, gathered in the rainforest and worked by hand with various plaiting techniques.

Borneo basketry – unsurpassed in its combination of beauty, form and function – is definitely one of the world’s richest (if not the richest) but little has been published about this until now. This richly illustrated volume offers a comprehensive look at the woven masterpieces created by Borneo’s rainforest artists, featuring objects made for use in all areas of life. It brings together all of the world’s living scholars and experts in the field of Borneo’s material culture plus several local artists and crafts people.

Not only does the volume present a comprehensive picture of Borneo’s plaited arts; it also provides a unique window into the way of life of Borneo’s inhabitants and the relationship they have with their rich environment. As a result, Plaited Arts from the Borneo Rainforest will be essential and compelling reading for aficionados, collectors and scholars alike.

Publication of this volume represents an undertaking by Total E&P Indonésie as part of its Corporate Social Responsibility programme for preserving Indonesian cultural heritage.

Bernard Sellato has been involved with Borneo since 1973, first as a geologist and later as an anthropologist.

Bernard Sellato has been involved with Borneo since 1973, first as a geologist and later as an anthropologist. A former director of the Institute for Research on Southeast Asia (CNRS and Université de Provence) in Marseilles, France, he is the author of numerous books and articles on the island (including Beyond the Green Myth, published by NIAS Press in 2007, and now Plaited Art from the Borneo Rainforest, due late 2011). Until recently, he was editor of the journal Moussons: Social Science Research on Southeast Asia.

We were fortunate to record an interview with Bernard at the 2010 Euroseas conference in Gothenburg. This has just been output as 3 short films, posted here and on YouTube:

1) Bernard recounts how first he came to know and love Borneo as a geologist (in 1973), later becoming a renowned anthropologist working on this land. Click here to view this interview.

2) He then describes how modernity is changing (often destroying) the world of Borneo’s hunter-gatherers, the subject of his co-edited work, Beyond the Green Myth. Click here to view this interview.

3) Finally, he describes the incredible richness of Borneo’s material culture, not least the basketry drawn from the products of the island’s rainforest. This is the subject of Plaited Arts. Click here to view this interview.