Nationalism and Cosmopolitanism in the Modern Malay World 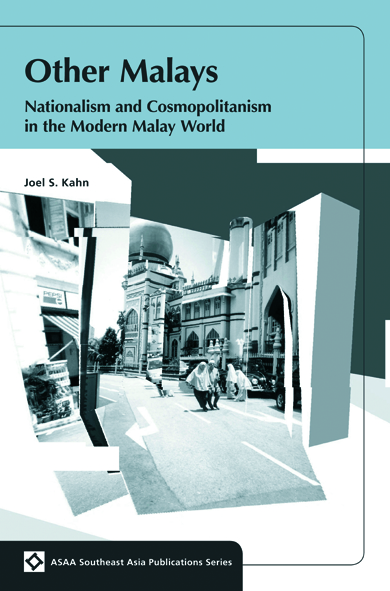 A simulating new reading of constructions of ethnicity in Malaysia and Singapore. Makes an important contribution to understanding the powerful linkages between ethnicity, religious reform, identity and nationalism in multi-ethnic Southeast Asia.

The narrative of Malay identity devised by Malay nationals, writers and film makers in the late colonial period associated Malayness with the village or kampung, envisaged as static, ethnically homogenous, rural, etc. Joel Kahn challenges the kampung version of Malayness, arguing that it ignores the immigration of Malays from outside the peninsula to participate in trade and commercial agriculture, the substantial Malay population in towns and cities, and the reformist Muslims who argued for a common bond in Islam. Owing to a rising dissatisfaction with the established order and new modernist sensitivities, especially among the younger generation, the author argues that it is time to revisit the alternative, more cosmopolitan narrative of Malayness.

‘[T]he questions Kahn asks are the important ones, and the material is drawn together in quite new ways’ (Janet Carsten, University of Edinburgh).

JOEL SIMMONS KAHN (BA Cornell University, MPhil, PhD, London School of Economics and Political Science, University of London) is currently Emeritus Professor in the Sociology & Anthropology Program at La Trobe University in Melbourne He has previously held Chairs in Anthropology at the University of Sussex in the UK, and at Monash University, and before that taught anthropology at University College London. He is a Fellow of Academy of the Social Sciences in Australia (elected, September, 1995).

His main work is in the broad area of social and cultural theory, with current interests particularly in phenomenology and the study of religious experience.

Over more than three decades he has carried out research on issues of development, globalization, race, culture, modernity, cosmopolitanism, identity formation, religious experience and secularization mainly in Southeast Asia. His current research project, funded by the Australian Research Council, is a comparative study of religion and transnationalism in Indonesia, Singapore, Malaysia, Thailand, Vietnam and the Philippines.

by Rita Smith Kipp
From journal:
The Journal of Asian Studies, vol. 67, 2

“With its historical and cultural focus, Other Malays provides an important
complement to social and political analyses of contemporary Malaysian politics.”

“With its historical and cultural focus, Other Malays provides an important
complement to social and political analyses of contemporary Malaysian politics.”

“This is a complex story, but one which is well told in this book.

“This is a complex story, but one which is well told in this book. For readers versed in the literature on ethnicity, identity and nationalism in Malaysia this is a provocative and stimulating read, which evidently invites further debate.”