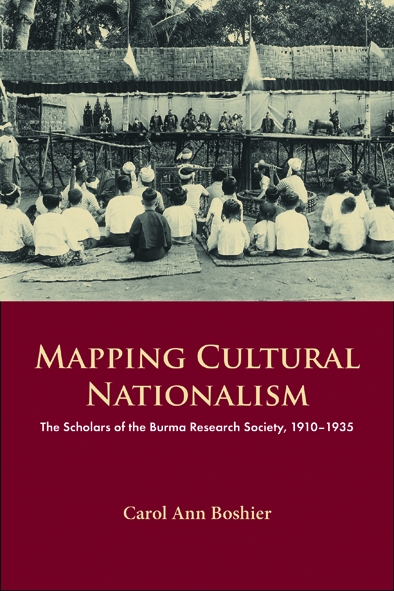 • Offers insights into the development of nationalism in colonial Burma.
• Informs current identity debates in Myanmar today.
• An important reference work for the study of boundary-crossing initiatives under British colonial rule.

Despite the proscription of public political debates under colonial rule in Burma, boundary-crossing ventures like the Burma Research Society (founded in 1910) allowed those from different racial and cultural backgrounds to engage in debates about national belonging and identity. At the same time their scholarship generated new historical and cultural knowledge. Such social and intellectual interactions sowed the seeds of nascent nationalism in Burma, not least a unifying Burmano-Buddhist hegemony as promoted by BRS members like J.S. Furnivall and his circle. This was contested by the regional nationalism of San Shwe Bu, with Leslie Fernandes Taylor also warning of the consequences of neglecting the ethnic and linguistic diversity of Burma’s many races. With the rise of Rangoon University and popular culture and militant nationalism coming to dominate the social and political landscape by the mid-1930s, the influence of the BRS began to wane. This detailed study of the BRS and its membership, together with an analysis of its published output, contextualizes the Society within its metropolitan and regional setting, as well as drawing on a broader, transnational intellectual landscape. This timely work on the Society’s intellectual legacy has the potential to inform current debates in Myanmar at a time when the activities of ultra-nationalist groups threaten other religions and ethnicities’ rights as citizens.

Carol Ann Boshier is a Research Associate at the School of Oriental and African Studies in London. Her work endeavours to understand the constraints and possibilities offered by social and intellectual exchanges between colonized and colonizing professional elites.