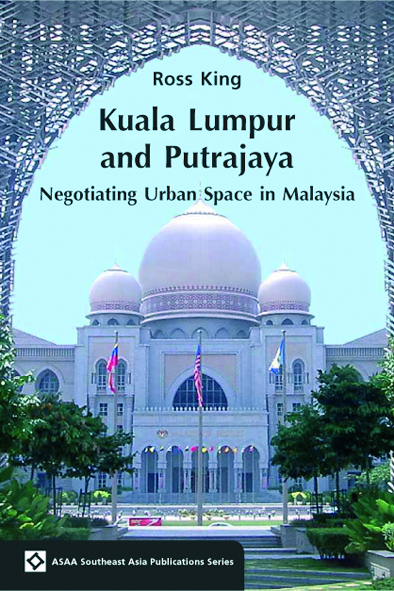 This copiously illustrated book compares the diverse, cosmopolitan, multi-racial metropolis of Kuala Lumpur with Putrajaya, Malaysia’s new administrative capital, which is an architectural homage to an imagined Middle East. King argues that the tension between the two places reflects the rifts that run through Malaysian society.

Arguably Southeast Asia’s most spectacular city, Kuala Lumpur - widely known as KL - has just celebrated 50 years as the national capital of Malaysia. But KL now has a very different twin in Putrajaya, the country’s new administrative capital. Where KL is a diverse, cosmopolitan, multi-racial metropolis, Putrajaya fulfils an elitist vision of a Malay-Muslim utopia.

KL’s multi-cultural richness is reflected in the brilliance and diversity of its architecture and urban spaces; Putrajaya, by contrast, is an architectural homage to an imagined Middle East. The ’purity’ of Putrajaya throws the cosmopolitan diversity of Kuala Lumpur into sharp relief, and the tension between the two places reflects the rifts that run through Malaysian society.

In this copiously illustrated book, Ross King considers what form of metropolis the Kuala Lumpur-Putrajaya region might foreshadow, arguing that signs of this future city are to be sought in the collision points between the utopian dreams of imagined futures and the reality of purposely forgotten pasts.

Ross King is a Professorial Fellow in the Faculty of Architecture, Building and Planning (and formerly its Professor and Dean) at the University of Melbourne. Educated as an architect and urban planner, he was also a graduate student under Louis Kahn at the University of Pennsylvania, where he also sat at the feet of such modernist luminaries as Le Corbusier, Lewis Mumford, and Arnold Toynbee. He has practiced as an architect, planner and policy analyst, taught at the Universities of Sydney and Melbourne, and researched (among other things) the complexities of urban housing markets, the cultural contexts and economic effects of urban and landscape design, and theories of design. He is also the author of Emancipating Space: Geography, Architecture and Urban Design (New York: Guilford, 1996).

Ross King is a Professorial Fellow in the Faculty of Architecture Building and Planning at the University of Melbourne, and from 1995 to 2002 was Professor and Dean in that Faculty. The main area of empirical research has been urban property markets, specifically in Melbourne since the 1930s. Market shifts have been observed in the context of economic and broader cultural changes and linked to changing ideas in architecture and the design of cities. This work is complemented by an interest in the nexus between architectural and urban design theory on the one hand, and social theory and literary criticism on the other; it has been summarised in his 1996 book Emancipating Space: Geography, Architecture and Urban Design (New York: Guilford). Subsequently the focus of both research and teaching has shifted to these and related issues in the context of East and Southeast Asia.
The present focus of research is the question of contested identities in the cities of Asia, and the roles of urban planning, urban design and architecture in such contestations. The work is in large measure building on experiences as a frequent visitor to East and Southeast Asia.
Present interests are research on Bangkok (“the Bangkok of everyday life”) and Kuala Lumpur. Relevant to the latter in the recently published Kuala Lumpur and Putrajaya: Negotiating Urban Space in Malaysia (NUS Press and NIAS, 2008). A longer-term project is a text on Asia and Utopia: Dreams and Anti-dreams of Urban Asia.
Go to author page