Sounds of Hierarchy and Power in Context 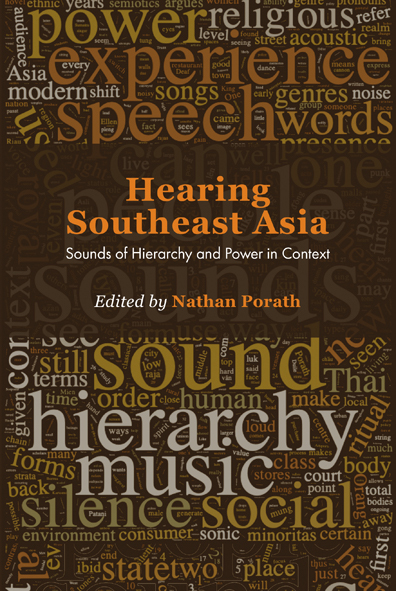 • A long-overdue study of sound in Southeast Asia.
• Offers non-Western perspectives in a Eurocentric field.
• Goes beyond examining sound in isolation to consider the sociocultural context.

There is no moment of our waking life in which we do not experience sounds or make sounds. The human body is a sound-making organism. In densely peopled areas like many parts of Southeast Asia, then, the potential is for tumult, an infinity of different sounds competing to be heard. Pandemonium is not unheard of in Southeast Asia – not least in times of political unrest – but in everyday situations uproar is uncommon; cultural, social, political and personal factors (among others) work to calm, channel or even silence the tumult.
Providing focus to this interdisciplinary volume on sound in SE Asia are detailed descriptions of the context of sounds and sound-making within the region’s diverse socio-cultural semiotic frames of hierarchy and power. Drawing on examples from Myanmar, Thailand, Malaysia, Indonesia and the Philippines, each author discusses some aspect of sound in relation to their ethnographic context. Sound examples are also found on a companion website. Varied approaches to understanding sound are offered but in some way each relates to hierarchy and power. All show the importance of sound for understanding the processual implementation of hierarchy (or its opposite) in the construction of the social environment and the role of sound in the efficacious engagement of power in a variety of religious and political form.
This is a much-needed volume, long overdue, not only offers non-Western perspectives to a field that is firmly Eurocentric; it also goes beyond examining sound in isolation, considering this instead in relation to the other senses and to sociocultural constructions. In such ways, then, the volume offers new directions of study, an exciting prospect.

Nathan Porath is an anthropologist who earned his PhD from Leiden University. Focused on Indonesia and Thailand, his research is mainly concerned with issues relating to indigenous peoples, shamanism and healing, medical anthropology, and modern Thai identities.