A Tale of the Founding of the Western Han

Translated and edited by Vibeke Børdahl and Liangyan Ge 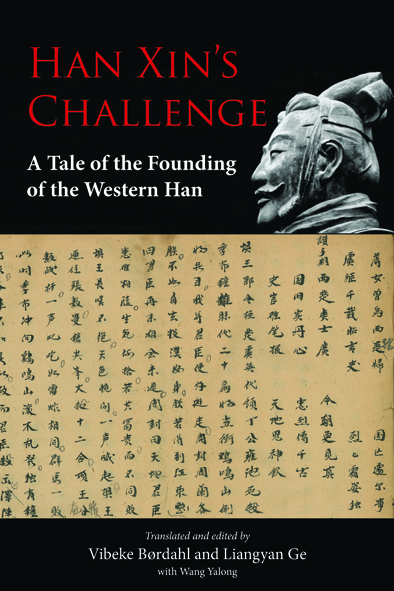 • A sweeping drama on the fall of China’s first imperial dynasty.
• First work to bring the Western Han saga to a broad English-language readership.
• Ideal text for the teaching of Chinese history, culture and literature.

The death of China’s first emperor in 210 BCE initiated a brutal power struggle between Xiang Yu, Hegemon-King of Western Chu, and Liu Bang, later founder of the Han dynasty; the lowly Han Xin also strove for advancement. For over 2,000 years, the resulting story has been celebrated in China. Even today its main protagonists are household names. This is an epic tale of courage and cowardice, honour and treachery, acted out by lords, officials and soldiers, mothers, wives and concubines, and has inspired great works of literature, performance and the arts. Yet only recently has this narrative been translated into English – in Western Han: A Yangzhou Storyteller’s Script by the same authors (see p. 50). To a large extent, Han Xin’s Challenge is a shortened version of Western Han, largely comprising its English translation plus explanatory text. It is more than that, however. The story has been made more accessible to the general reader without compromising the accuracy of the translation. Its text is also illuminated with artwork that brings the narrative to life and shows how embedded the tale is in Chinese culture, even today. The result is a text ideal for the teaching of Chinese history, culture and literature. But also it is a sweeping drama, a page-turner, a story that anyone can enjoy.